Poly and Olivia are in relationship. Poly has secret kinky bondage fantasy, she likes to be captured, tied up and tape gagged, like helpless hostage in scene in movies. One day after finished her job late at night alone, she watches a movie on her laptop and there is a scene where a girl is tied up and tape gagged that scene really turns her on so after Poly finished watching it she decides to role-play realistic under control style self bondage. She strips herself fully naked. She brings out a roll of black duct tape and white(12mm thickness size) plastic zip ties and starts by restrains her both ankles together with zip ties and then neatly tape gags herself with a single strip of black duct tape and then puts her both wrists inside the loop of zip ties and pulls it.

After she finished tied and gagged herself, she starts acting her role play as a hostage pretending that someone break into her office to stole her. She enjoys struggling on the couch and on the floor making sensual hmmmmhmmm sound and muffled moaning and teasing to the camera she struggles like that for few minutes. Poly then sending seductive teasing video message to her girlfriend showing Poly tied and gagged making sensual sound. Olivia knows that this is a tease to invite her to join the play as they usually play bondage together. Olivia then decides to go to Poly’s place to play. Olivia decides to make it more realistic by wearing black balaclava and dressing herself in slim fit black long sleeve and slim fit black pants like a sexy female thief and pretending to be a maniac and enter into the room where Poly is captured.

Poly knows that this is actually her girlfriend but Poly continues acting in her role as a hostage and Poly provokes her girlfriend to do something more intimate to her by making sensual seductive muffled moaning and seductive struggling. The girlfriend then cut the zip ties that restrains Poly ankles so that Poly could walk but her hands are still tied behind her back and her mouth still tape gagged. The girlfriend then escorts Poly to the dungeon. After they arrived in the dungeon, Olivia removes her boogaloo and reveal herself and then the girlfriend strips herself naked and starts making intimate sensual lesbian bondage domination, kissing Poly’s tape gagged lips, touching, licking and gentle biting Poly’s sensitive nipples. Poly is unable to resist because she was tied and gagged. The girlfriend then uses vibrator on Poly’s pussy and Poly gets intense sensual orgasm. After playing some intimate sensual domination to Poly for a while, Olivia then decides that she also wants to be tied up so she walks outside the dungeon to dress herself in normal cloth and start her new role as Poly’s normal girlfriend who concern that Polly didn’t return home so she comes to Poly’s office and accidentally discovered Poly in the basement, naked, tied and tape gagged. The girlfriend immediately remove Poly’s tape gag and untied her.

Poly tells her girlfriend that the maniac is still in the building and will return soon so they need to escape quickly. Poly dresses herself up and they start escaping but it is too late the maniac (the viewer plays this role) returns and both girls are ordered to undressed again (strip fully naked again) and tied and gagged each other. First, Olivia is order to tied and gagged Poly, she restrains Poly’s wrists together behind Poly’s back with zip ties and then restrains Poly’s ankles together with zip ties and tape gags Poly with a single long strip of black duct tape. After she finished restraining Poly, Olivia is ordered to tied and gagged herself in the same. Both girls are left struggling in the dungeon but instead of frightening they start intimating lesbian tape gag kissing (they kiss each other while both girls are still tape gagged) touching themself. The girlfriend is able to play intimate lesbian sensual domination role because her ankles are free while Poly plays submissive. Olivia is able to get her tied hands from behind her back to her front by getting them through her foot. Olivia then use vibrator on Poly’s pussy and makes Poly reach sensual orgasm. 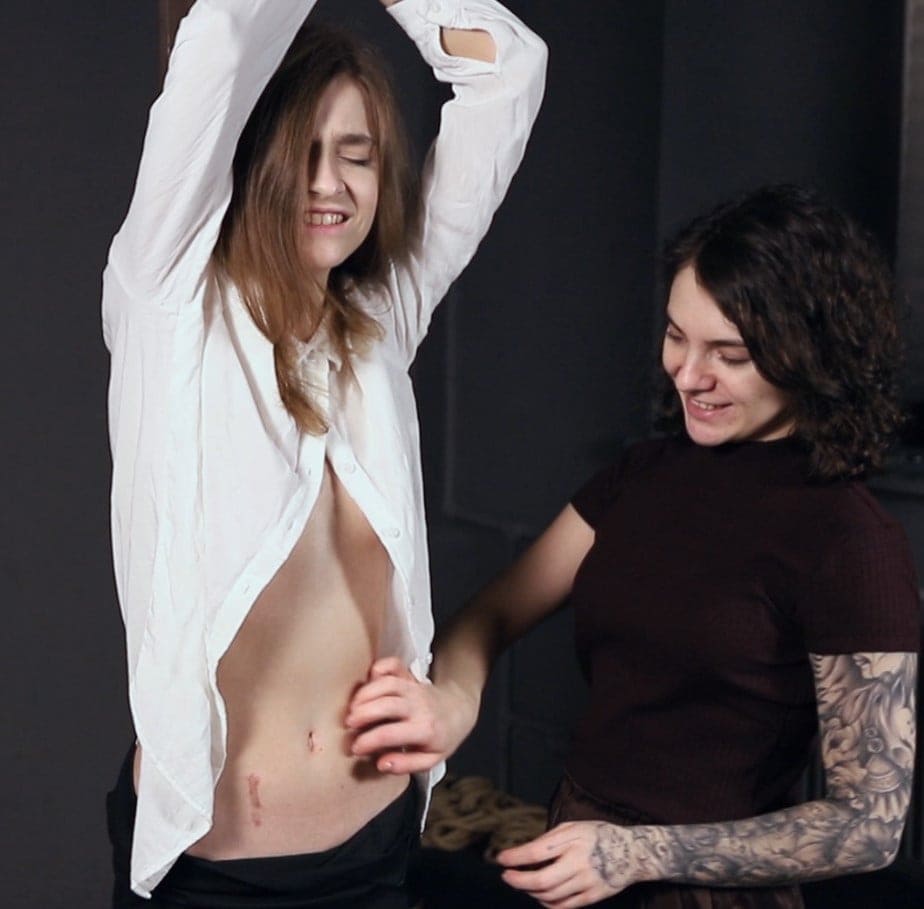 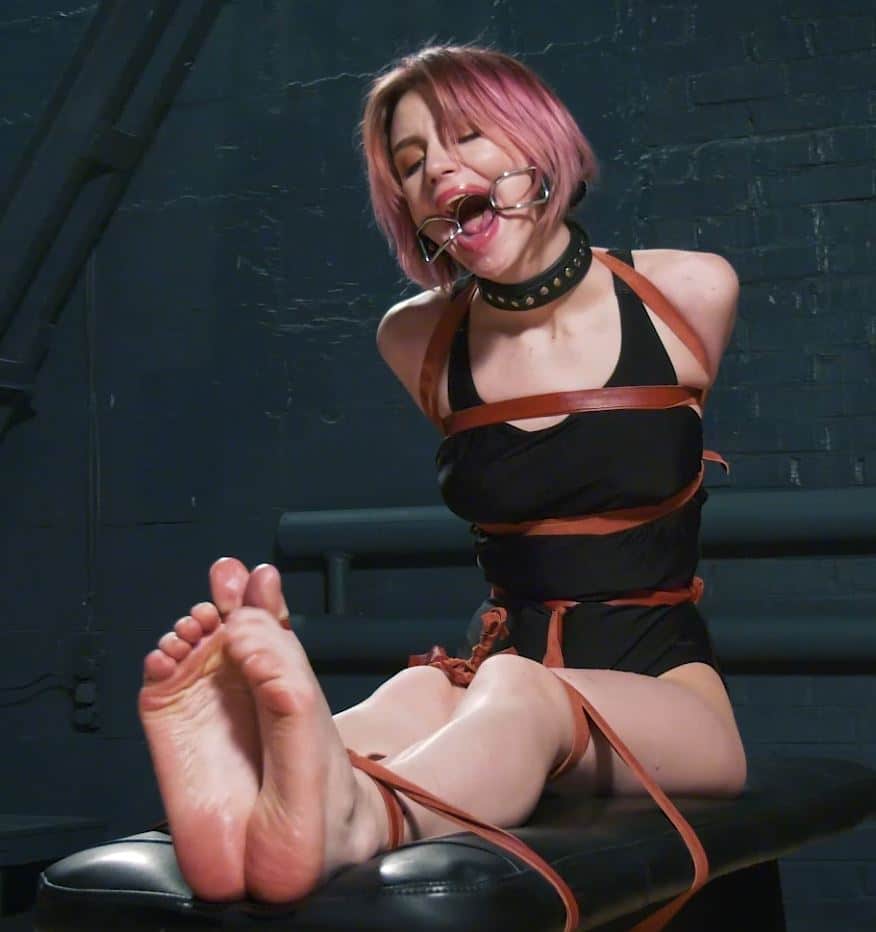 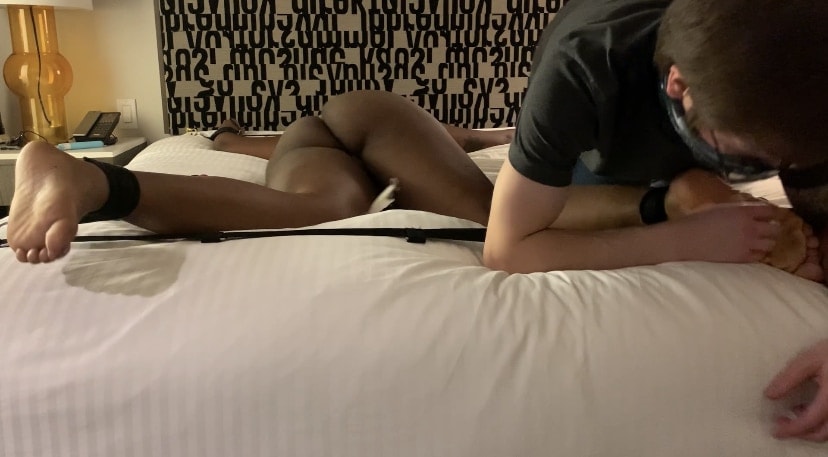 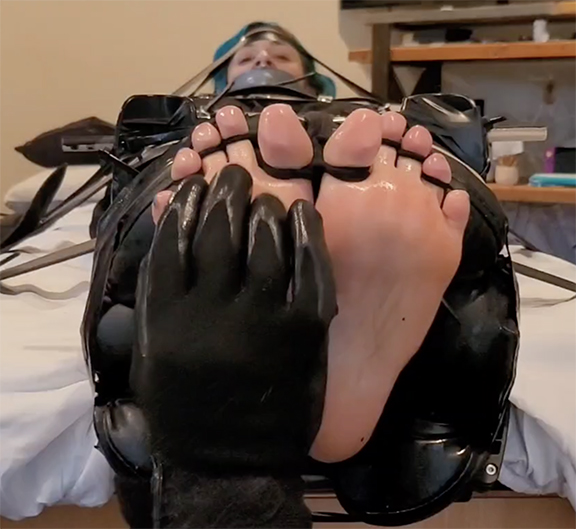 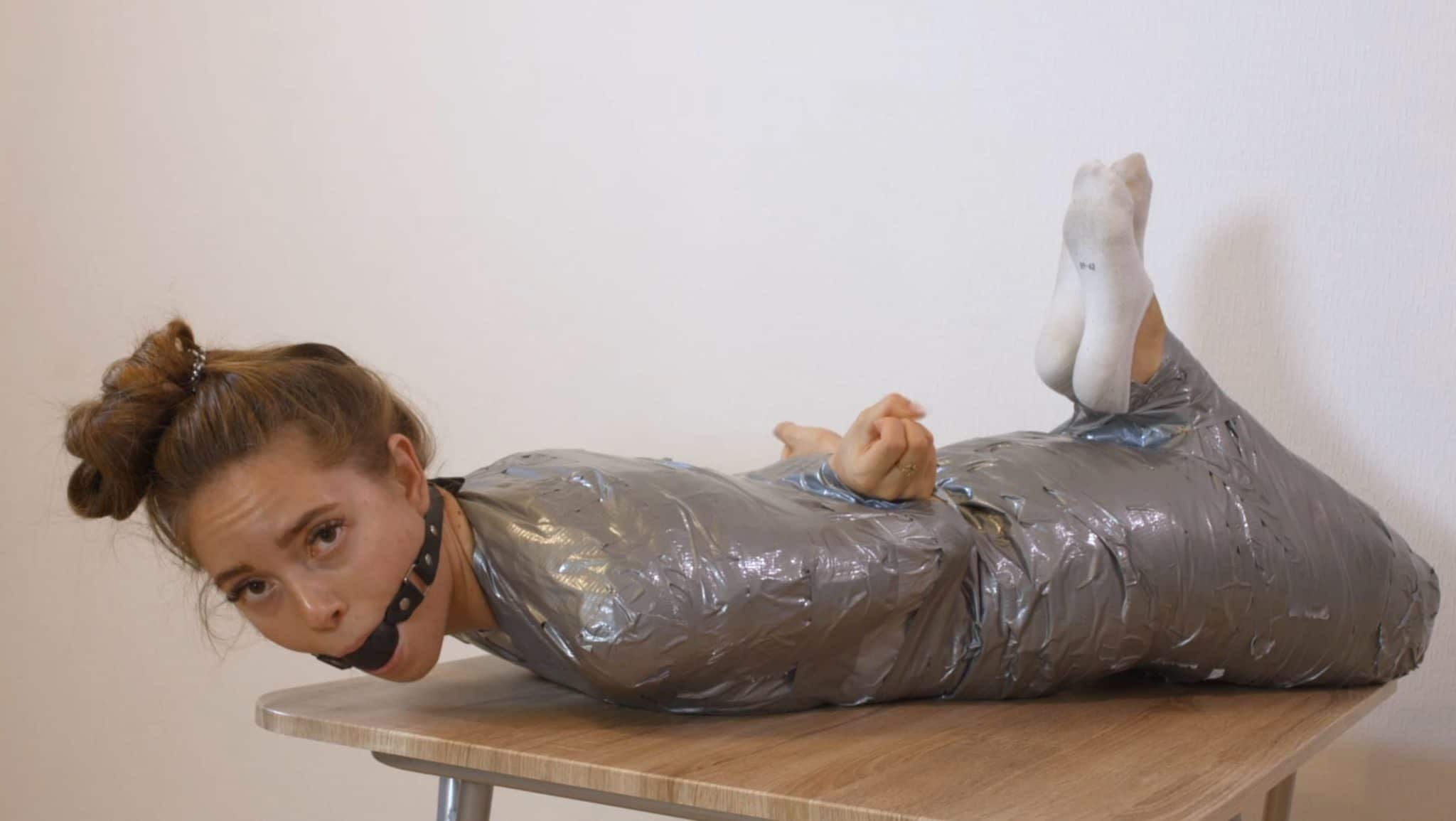